Robert G. Tardiff, PhD’68, came to the University of Chicago in part because of a letter. “It was about five pages long, single-spaced,” Tardiff says, “almost like a printed manuscript.” The letter, from UChicago toxicologist Kenneth DuBois, laid out the many reasons why Tardiff should join the toxicology program.

It was convincing, and it launched Tardiff’s career as a toxicologist, studying the consequences of various chemicals on the human body. As a U.S. Public Health Service Commissioned Corps officer and director of a lab in Cincinnati—a job he stepped into immediately after graduating—Tardiff led a team that dealt with the serious contamination of surface waters that were used to feed drinking water systems. “I did calculations for a safe level of exposure for a variety of populations,” he says, “and with colleagues, pulled the trigger to try to close down drinking water intakes if necessary.”

He stayed in Cincinnati for about a decade, during which he became chief toxicologist for the newly established Environmental Protection Agency, before moving to Washington, DC. There he led the National Academy of Science’s first board of toxicology and environmental health. It was more of a science policy position, he says, but one of his big projects drew on his experience at the EPA. “It was a series called ‘Drinking Water and Health’—an encyclopedic version of everything you ever wanted to know about chemicals that are or are likely to be in drinking water, as well as the safe level of exposure,” he says.

The nine-volume series also helped generate an interest in using what was then considered a new science: risk assessment. “It involves the ability to quantify how much risk is associated with over- and underexposures to chemicals,” he says, and can help inform public policy and health decisions. Later Tardiff helped found and served as president of the Society for Risk Analysis.

Today, Tardiff lives in the Washington, DC, area and consults for a large water utility in Hawaii and is a member of Georgetown University’s Institutional Review Board.

Yet his University of Chicago education sticks with him. “I’m still driven by not only the facts that I learned, but also the principles of doing good science and the need to communicate that science accurately and effectively. That really derives from my education at the University.”

Tardiff was one of the challengers for the 2016 UChicago Giving Day—24Hour Impact—a day-long fundraising campaign to support the University of Chicago. Tardiff and co-challenger Amy Derick, MD’02, each pledged $10,000 for the University of Chicago Medicine and Biological Sciences. The campaign was a huge success; in just one day, Tardiff and Derick helped inspire gifts totaling $61,767 from 163 donors.

There are two reasons why Tardiff supports the University of Chicago every year: “It’s an appreciation for what I was given back in the ’60s. I could have never paid for graduate school myself. It’s also the realization of what it’s done for me, and today it does as much, if not more, for the students the University attracts.”

Paving the path for future generations

When Dr. Ruth Covell was just a two-year-old, she announced to her mother that she wanted to be a pediatrician….

By Stephan Benzkofer Rebecca Cerrato, MD’01, and A. Holly Johnson, MD’01, check an X-ray to verify the correct placement of…

A commitment to giving back

Chances are Christopher Mattson, MD’17, will manage to seamlessly combine a career in pediatrics with a life centered on giving… 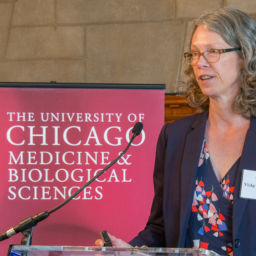 Dean shares 2019 goals for the BSD

Victoria Prince, PhD, dean and director of the Office of Graduate Affairs in the Division of the Biological Sciences, is…